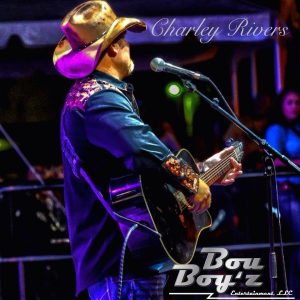 May, 1st 2018 Bou Boy’z Entertainment signed Country Artist “Charley Rivers”. Charley was born in Alexandria, LA, and raised in Simmesport, LA. At nine years old Charley received his first guitar from his mother. He sang in his church choir & it wasn’t long before he was entertaining family and friends.

Charley is heavily influenced by his traditional country roots and his all-time hero Merle Haggard. He became well known throughout central Louisiana after he entered the Colgate Country Showcase Contest in July of 2001. Being stood up by his band member, but encouraged by his family and friends, Charley chose to sing solo with his acoustic guitar. His warm, charming voice overwhelmed the crowd & the judges as he sang two of his original tunes. “Watching Time Go By” and “Bar Room in A Bottle”. He not only became the local winner but won the state level as well, just him and his guitar. He later went on to pursue his career and moved to Nashville where he played gigs, wrote music, and recorded albums.

He currently gets AirPlay on FM radio stations in Louisiana and Internet Radio stations as well. He has an established and growing fan base that spans from local to International support. He currently tours venues and Festivals throughout Louisiana/East Texas/Mississippi and features a diverse setlist of traditional country to today’s country songs. He has 3 albums with original and cover music, and many of his songs can be purchased through iTunes and CDBaby. For booking inquiries contact us below.